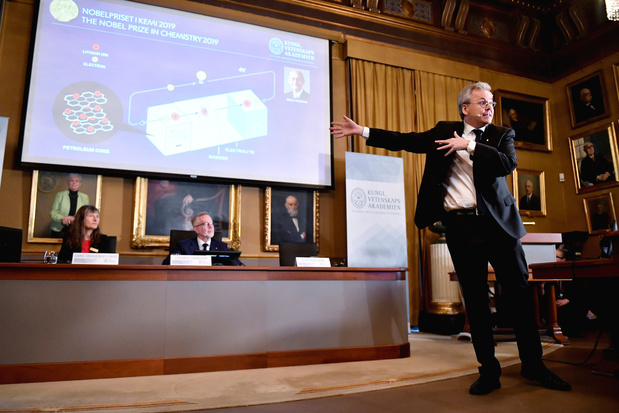 The 2019 Nobel Prize in Chemistry was awarded on Wednesday to John B. Goodenough of the United States, Stanley Whittingham of Great Britain and Japan's Akira Yoshino for developing lithium-ion batteries, which are safer than lithium-only batteries, announced the Royal Swedish Academy of Sciences.

"Lithium-ion batteries have revolutionized our lives, they are used everywhere: from our mobile phones to computers and electric vehicles," said the Academy. "Through their work, the laureates laid the foundation for a wireless, fossil fuel-free society." John B. Goodenough has doubled the potential of lithium batteries, "creating the right conditions for the development of a much more powerful and useful battery", while Akira Yoshino has succeeded in replacing lithium pure with lithium-ion, safer, making the battery usable in practice.

As for Mr. Stanley Whittingham, he used in the early 1970s the enormous conductivity of lithium to release its external electron when developing the first functional lithium battery, said the institution. In announcing the winners, Göran Hansson, Secretary General of the Royal Swedish Academy of Sciences, welcomed the audience's enthusiastic reception of award-winning works. At 97, the German native John B. Goodenough is the oldest winner of the Nobel Prize in chemistry. Before him, John B. Fenn won this award at age 85.